How to Play Chess

Chess is a game played with two opposing armies of sixteen pieces each, on a board of alternating black and white squares. One army is black, the other is white. Players take turns to move one piece at a time, and the object of the game is to trap the opponent's king so that it is unable to move without being threatened. 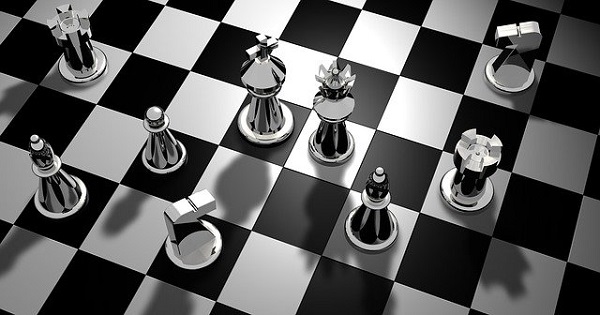 No two pieces may occupy the same square at the same time. If a piece lands on an occupied square, the opposing piece is "taken" from the board.
Each player begins the game with a king, a queen, two rooks, two knights, two bishops, and eight pawns.
Set up the board like this, with a black square on the bottom left corner.

Each piece moves in a different way.
The knight moves in an L-shape, two squares in one direction, and one square perpendicular to that. It is the only piece that can jump over pieces to reach its destination.
The bishop moves any number of squares, but diagonally only. One bishop moves on black squares, the other moves on white squares.
The rook moves any number of squares horizontally or vertically up and down the board.
The king moves one square at a time in any direction. He may "take" the opponent's pieces, but he must not land in a square that is threatened by his opponent.
The queen can move any number of squares in any direction (but cannot jump over other pieces).
A pawn moving for the first time can go one or two squares forward. After that, it can only move one square forward, except when it is taking an opposing piece, which moves it forward one square diagonally. If a pawn reaches the other end of the board it is promoted into any piece the player chooses (usually a queen).

When a player moves a piece into a position that threatens the opposing king, the king is in check. The other player must immediately eliminate this threat, either by blocking the opposing piece, taking it, or moving the king out of check. If this is not possible, the king is in "checkmate" and the player loses the game.

If a king and rook have not moved yet and there are empty squares between them, the player may perform a "castling" move, but only once during the game. This involves moving the king first so that it is next to the rook, then moving the rook to the other side of the king. You cannot castle to get out of check, nor can the king pass through check during the maneuver.

Sometimes the game ends in a draw. This can happen in five ways:

Touch it, move it

If you touch a piece, you are expected to move it, unless that move is illegal. So think before you touch.
Post under : #How to

I like blogging. In my opinion, sharing knowledge is something fun. Moreover, what we share can make a difference for those who want to learn it.