How to Play Billiards

How to Play Pool

This is the traditional original English three-ball variety, a game played by gentlemen long before snooker and pool were even in diapers. Here are the rules. 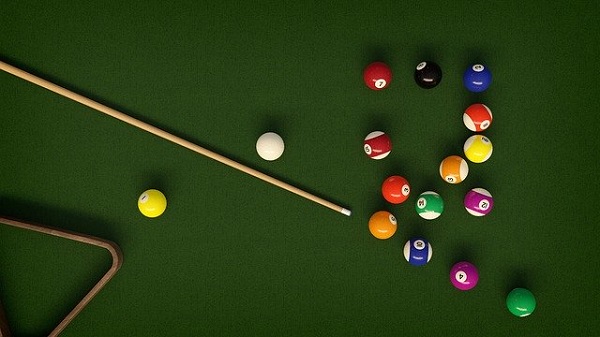 At the start of the game, the red is placed on the spot furthest from the "D" (the black spot in snooker, called "the spot"). The first player plays from in-hand, from within the "D," and the second white ball stays off the table until the second player makes his first shot (also in-hand within the "D").

When the red is potted it returns to the spot. If this is occupied, it goes on the pyramid spot; if the pyramid spot is occupied, it goes on the center spot.
All foul shots score two points for your opponent. A foul shot means that you end your turn and lose all points scored during it. After a foul, the other player can play the balls where they are, or move the red to the spot, place your ball onto the center spot, and play his or her own white ball from in-hand from the " D."

Breaks can get into the thousands.
If you get the two balls very near a pocket it means you can play repeated cannons and in-offs easily.
The ideal thing to do is get the two balls jammed in the pockets so you can get consecutive cannons (but you can't take more than seventy-five consecutive cannons in one turn). And consecutive pots or in-offs not combined with a cannon are restricted to fifteen.
The art of the game is either getting the balls close to the pockets or getting good angles. Angles are very important. You are generally not hitting the balls very hard but are doing gentle strokes most of the time.
Post under : #How to

I like blogging. In my opinion, sharing knowledge is something fun. Moreover, what we share can make a difference for those who want to learn it.